“Try not to suck!” Parallels in sports, business, and personal life.

F.B. International President, Fabrice Bonvoisin, writes about the book “Try not to suck,” by Joe Maddon and why it resonated so deeply with him. This post was written as part of FB’s Weekend Digest series where our team highlights some things we found interesting from the past week. 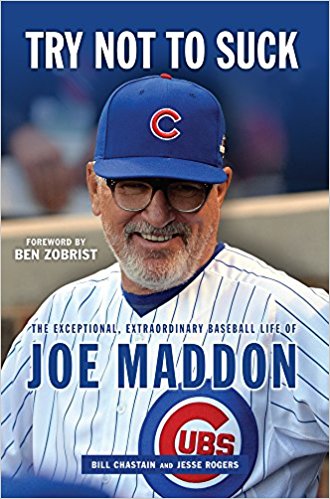 This great line from Cubs’ manager Joe Maddon resonates a lot with me. After reading his book by the same title, the connections are at 3 levels: personal, sports, and business.

At the personal level, Joe’s stories about his Italian family remind me stories of my Italian grandfather who fled the fascists in Italy to settle down in Calais, North of France. Joe and my grandfather would have been best buddies. They both combine the desire to excel in business, the eagerness to try new things, the willingness to help their communities, the passion for sports, and always having fun.

My grandfather, my hero, was living a door step away from my middle school. That’s where I spent most of my after-school time, waiting for one of my parents to pick me up after work. He was a genius watchmaker with a talent for invention. In 1951, he built a miniature train from scratch and presented it to the Concour Lepine, a prestigious French conference recognizing craftsmanship and inventors. The jury could not believe that his entire train set–lights and water jets included–were made solely from his craftsmanship and gave him an Honor award instead of recognizing him the year’s best craftsman. His door was always open, even to strangers in need. He tried to help everyone with the little he had. My grandmother was a great cook (the best rice cake on earth!), so guests for lunch or dinner were frequent. He had also a passion for race cycling. He was the president of the cyclist club of Calais and my uncle, one of his sons, was a racer who completed his last 154Km race in June 2018 at the age of 83. However, what I remember the most is that he was always goofing around. He would play marbles with my classmates after school to win back the ones I’d lost during the day, at church or during marriage ceremonies at City Hall, or during Board meetings of his cycling organization (to which he often invited me). He always had fun in his life even during tough times.

Many people know that I was born into Manufacturing; my Dad was running the family business making lace in Calais. I grew up watching him managing 35 employees, going to trade shows, or going with him to the office on the weekend. I also saw him close the business in the early 70s, avoiding going bankrupt at the time of the oil embargo and the emergence of Asia as the giant competition for textile. Then I worked in Manufacturing, whether it is as a consultant for small companies or as an executive at the global research center of the 4th largest aluminum producer in the world. That’s where I married Manufacturing, meeting my wife who was a mechanical engineer for the US division of the group called American National Can and located in Chicago. Since my arrival in Chicago in 1997, I never stopped working with small and medium manufacturers. Manufacturing is part of me. It is my passion and as Maddon would say, “I don’t like it, I love it”.

Fewer people know the other part of my life which is directly related to sports. My mother was a PE teacher at a local high school. Following in the tracks of her father, she fell in love with Rhythmic Gymnastics–the one with the ribbons, rope, ball, etc. After learning more about it, she created her own club in 1973 with only a handful of gymnasts, of which two were my young sisters. In 1988, my parents were able to build the first gymnasium dedicated to Rhythmic Gymnastic in the country. This is an accomplishment knowing that Calais had been a strong communist municipality for over 40 years. In an interview that year, my father announced that the club had enough talented gymnasts to aim for national and international titles. Not only he was right, but he also reminded me Maddon’s interview at the Cubby Bear when he announced that his goal was the post-season and the World Series title. He later explained that “If you aim low, you might hit the mark. So, aim higher.” After winning many national titles, their gymnasts started to go to European and World championships. They reached the top by becoming a national training center and representing France at the Olympic games in 1996, in Atlanta (USA), and again in 2000, in Sydney (Australia).

Sports was part of our family life. We were all involved in gymnastics. My Dad was the President of the club and took care of all the operations. My mother was the head coach and my sisters were among her gymnasts. I was helping my father before, during and after local competitions or even as a driver for other tournaments.

As a direct result of this rich family environment, my two sisters and I are all entrepreneurs, each in a different sector.

This heritage also impacted my management style. I am a Cubs’ fan, and when I saw Maddon’s book I thought to myself: “High level sport and coaching, hmmm, sounds familiar… I’m curious to see.” I really enjoyed every page of the book and went through it in less than 2 weeks. When Maddon says “I love funk; I’ve always been a funk guy. Funk is good,” I tell my team “life is too short; we spend more time with our colleagues than with our own family. Let’s enjoy it and have some fun”. When Maddon says “If you aim low; you might hit the mark, so aim higher”, I would respond “I want FB International LLC to be the go-to organization for manufacturers and trade commissioners” to a Chicago attorney at one of the prestigious law firms asking me “what is your goal?” When Maddon says “Do simple better,” I would say “keep it simple stupid – KISS.” It is particularly true in international business where we are constantly confronted with cultural differences and language challenges. My passion constantly makes me think “how can we do better next time?” I often tell my team “you have the right not to know, but it is your duty to learn.” Like Maddon, I believe in empowering my team.

Like my parents and my grandfather, I looked for ways to help communities and share my passions. For over 15years, I volunteered at the Employment Council at St Chrysostom Church hosting a networking group for people in transition as part of the Chicago Transition Center. For me it was a way to keep a foot in Human Resources, which I practiced and loved (as it is done in France!). Then, I got involved with the International Trade club of Chicago, the oldest trade club in the country and the former go-to organization for manufacturers in the city. First elected President in 2013 (and I am still serving to this day), I am following in the tracks of my parents and grandfather by sharing my passion for international business with others. My goal is simple: “get ITCC to become once again the go-to trade association for both American and foreign manufacturers.”

By the end of Maddon’s book, I found myself in many of his principles. 90% of our success is based on preparation and hard work. We certainly learn from our mistakes, but even more so from listening to others and comparing notes. In terms of management style, having fun with your teammates, whether it is on the field or at the office, is more a sign of mutual respect and strength than weakness.

Today, I consider myself lucky. I love what I do, every single day. I have a young, talented team and great clients upon which we can build. I am grateful to the mentors I learned from during my career before I became an entrepreneur, 16 years ago. Although she won’t admit it, FB International LLC would not be the firm it is today without my best partner – my wife Patti. I thank her for helping me during these years trying not to suck. I hope to make my family proud by using what they taught me to be who I am today: a man driven by passion.

P.S. The book is available for purchase here.